Provocation | The Spear and the Carrier Bag

The radical narrative theory of Ursula K. Le Guin and why it is more relevant than ever

If literature departments in Israeli universities seek relevance, they must start teaching and exploring the work of Ursula K. Le Guin, acclaimed science fiction author, who passed away in 2018 at the age of 88. 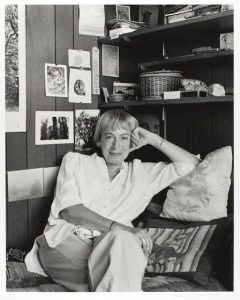 In support of this argument I’ll present the radicalism in Le Guin’s thought and the manner in which she shaped the way I myself think about literature, life and their reciprocal influence. To do this I’ll begin with media theoretician Marshall McLuhan’s most famous idea: “The medium is the message”.

The claim on which the expression “The medium is the message” is based upon, is that when analyzing any media technology, what’s important is the medium itself, and not the message (“content”) that is transmitted through it. A train is a train and it affects humanity the same way whether it transports cargo around Europe or takes people to work in Asia. McLuhan said of the machine, the production line, that it affects man all the same, whether it produces luxury cars or popcorn.  It is of course true about television – it doesn’t matter what we watch on TV, rather the very fact that we sit in front of the television every night. This is true also about literature, and more specifically about storytelling, a medium that is almost transparent to us. We always think about the content of the story, but we do not take into account that storytelling itself enwraps a message, by virtue of being what it is. And what it is, is something much more biased than we may believe it to be.

In 1986 Le Guin published an article titled “The Carrier Bag Theory of Fiction“, the shopping cart theory of literature. In general, she claimed in the article that through eons humanity lived in gathering societies. We picked fruits, collected nuts, gathered plants and occasionally lucked out with an accidental hunt. One day several men got up, went out into the field, and stumbled across a gigantic animal (in our collective memory it is of course a mammoth), killed it and came back to the tribe with the spoils. But what they brought back with them to the tribe was far more significant than the meat from the hunt – they came back with a heroic tale. “I did this, and a friend of mine jumped out, in front of it, from here, then I flanked it from there, he strangled it, was trampled under it, and then I slit its throat with that pointed stick and killed it.”

This tale became the human narrative, and the little tool, the pointed stick – the spear, sword, arrow – it became human technology. In our collective experience, this phallic form is known to be the origin of technology, the first tool, and it is what had allowed us to spread out and become what we are today. This story – the hero who tackles a monster (real, mental, bureaucratic) and defeats it (or loses, if it is a tragedy) – Is the story we are all familiar with. For us, this is how a story is meant to be told.

But Le Guin reminds us that before all this there were tens of thousands of years of gathering. We ate from the tree and field, and what we wanted to keep for tomorrow, we kept inside a pouch or some basket – this was the first tool, the initial technology that allowed us to spread and expand. It was the first thing that transformed us from an animal that is surviving from one moment to the next into a complex creature that thinks about tomorrow. But there is no story to it; It is impossible to tell a heroic tale about how I struggled with a nutshell and came home with ten acorns. It’s just not as interesting.

In her literature, Le Guin tries to tell different stories. True, there are always heroes and there are always obstacles that they try to overcome, but “The real journey is coming back”, to burrow one of her captivating quotes from her novel “The Dispossessed“. In her article she writes that the hero hijacked the novel; she doesn’t believe we need to give him the front stage but rather put him inside the basket or carrier bag to mix with other ingredients. The societies she describes in her novels mix femininity with masculinity, dream with reality, actions with consequences, intentions with acts; everything is more circular, more ambivalent.

It is not obvious that if the hero has a strong enough desire and that if he kills enough monsters, he will get what he wants, because it is not even clear what he wants. Her storytelling style is not exactly the unleashed arrow flying straight ahead, the same linear movement of hero-desires-obstacles-victory.

That is why her literature is so radical. Because it makes us wonder “what if”- and the “what if” question is at the heart of science fiction. What if the default of storytelling was not the arrow flying straight ahead, but the circular narrative? Not one, but zero. Not a spear, but a basket. What would reality look like then?  Possibly, some capitalist, masculine, violent wrongs would have been spared from us. She reminds us to think about the very medium of storytelling, not just about the content, but on how we tell any story.

She’s not only radical because she presents in her stories anarchist, socialist and a-gendered possibilities of society, but because she explores and presents how the very basis of storytelling could have looked like, how our thinking would have changed, and how this change, might have changed the world.  And it’s so much more interesting than reading literature through the prisms of gender or class or all that shit that’s being taught in numerous literature departments and faculties of the humanities. Le Guin is a true radical, the kind of radical we need. 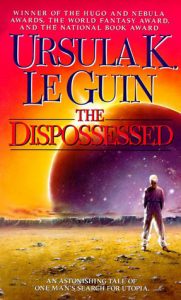 Journalist & poet, fascinated by the strange interconnectivity of things.