Chicago, IL – I am sitting in a small café on the Chicago Riverwalk, in what is probably the busiest stretch of the city’s beating financial heart, the iconic Chicago Loop. Trump Tower’s hulking glass façade dominates the water, competing with the sparkle and shine of the river’s golden ripples as the sun slowly climbs up to the middle of a clear blue Midwestern summer sky. A jovial Samoan waiter hands me a steaming cup of Matcha latte, and as he moves away I see a lanky, bespectacled figure making his way through the pedestrian throng. The figure sees me, waves, and threads through the shop’s outdoor tables, beelining toward me.

Meet Adrian Jones. Despite the tucked-in polo shirt, receding hairline and apparent nearsightedness, all conveying middle age, Adrian’s awkward, enthusiastic expressions and body language betray his youth. At twenty six, he is one of contemporary America’s most controversial and influential figures.

His Augmented Reality (AR) app, eRace, is taking the country by storm.

If you haven’t already, you will likely bump into an ad or a recommendation for the application on the “Top Apps” section of your mobile app store of choice. For the uninitiated, eRace is an AR app that changes the skin tone, facial proportions and accent of every person the user comes across, to fit the user’s own cultural and racial profile. While the app’s official description claims its aim is to help overcome racial bias, critics insist the app’s core concept perpetuates racism by effectively preventing users from consciously dealing with ethnic and cultural diversity.

So, Adrian, where did the idea for eRace come from?

Well, do you remember that old musical, Avenue Q? It first hit Broadway some thirty years ago or so, around 2005.

Yeah, that one! Well, my parents played the soundtrack all the time when I was a kid, and one song that stuck with me was Everyone’s a Little Bit Racist. That song always resonated with me, and the more I grew the more bothered I was by racial bias. And you know what, it turns out that it’s a biological truth – the more someone resembles you, alongside their being more attractive, the more you are receptive to what they have to say and to the decisions they make. Even if you are the most self-aware person in the world, you’re still wired to prefer people that resemble you, both culturally and physically. And you know what? I think that’s bullshit.

Why? It makes sense that people from similar backgrounds share similar ideas and even a similar sense of morality. Race and accent can be helpful in identifying those similarities as well as in indicating when a rift caused by cultural differences may be imminent. If you erase the indicators you might misplace the cause for that friction.

That’s a valid point, but I have to disagree with you. I think all people share a common morality, and that perceived differences mostly result from arbitrary biases. When someone rubs you the wrong way, it’s not cultural, it’s personal. Still, you’ve voiced a concern that we’ve heard before, and we are working on implementing an element in our HUD that will textually specify the race and accent of people our users converse with, if they so wish. That way, first impressions are still visual, but certain misunderstandings can be traced to cultural roots.

Alright. Tell me more about your choice of name for the app. Using the word “race” has been very controversial.

Still, you must be aware of the connotations “erasing races” brings up.

Not really. What connotations are those?

I resent that. Clearly, we’re fighting against racism, not for it.

Some people say that making people deal with only others of their race perpetuates a racist outlook rather than abolishes it.

That seems academic to me. Bottom line, people of different backgrounds are now interacting in a non-biased way with each other, in very heterogenic groups.

What if they were to remove their ARLenses? Would they even be able to recognize their friends?

You’re big on hypotheticals, aren’t you? Anyway, if someone were to go Lensless, not being able to recognize their friends and loved ones would be the least of their problems.

That’s true. Still, several lawsuits have been filed against you. Are you at all worried about the controversy?

Not at all. As you probably know, several states have already chosen to make use of the app a compulsory requirement for all local government employees – including judges. I find it difficult to believe that they’ll rule against us, when it’s us that control what they can and can’t see.

Well, other than the textual racial information I’ve mentioned, we’re working on an Ewok “Easter egg” with Disney and AnyScene. It’s going to be great! It won’t just make everyone look like Ewoks, it’ll actually dynamically transform users’ surroundings into a tree village!

Wow! What kind of challenges has that raised?

Well, as long as everyone the user is seeing is wearing clothes, there’s no problem. But creating realistic Ewok genitalia which still correspond to human anatomy has been tricky. Disney have been great, though. They’ve shared extensive anatomical details with us, and even provided us with several cloned Ewok cadavers to dissect at their facilities. Our designers were really happy about the free trip to Star Wars Land, let me tell ya.

Thank you so much Adrian, this has been fascinating. 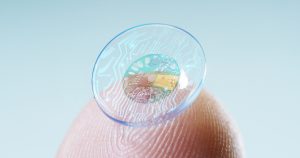 Smart contact lenses, The Holy Grail of AR, a number of tech startups and R&D departments at major tech companies are currently pursuing it

Footnotes and Other Stray Thoughts

1 // Sight, Israel 2012, a short film by film-makers Daniel Lazo & Eran Mey-raz, presented at the Utopia 2012 International Film Festival for Science Fiction and Fantastic Film, winning 2nd place. It was prescient in many ways. Have a look. Sight Extended is currently in production, a full-length sci-fi feature film based on the original short.

Fiction and Art | Hindsight is Always

Deep Dive | The Enemy Within