How do we talk about the new uncanny numbers and foreign scales that became our reality in the past few months?

“Space is big. Really big. You just won’t believe how vastly, hugely, mind-bogglingly big it is. I mean, you may think it’s a long way down the road to the chemist, but that’s just peanuts to space.” – Douglas Adams, The Hitchhiker’s Guide to the Galaxy

Our everyday lives are based and circled around measurement units. At times, these measurement units are transparent: “I’ll see you in an hour”, “one  teaspoon of oil for every cup of water.” These uses of measurement units are important for our existence: they provide us with common language and hence, enable more efficient collaboration. However, there are measurement units which we take for granted: they organize our lives just like the conspicuous ones, but we do not pay them any attention. Who sits at home and counts the years of his life? Who isn’t familiar with the feeling of two weeks passing by in a day, or when few pocket expenses suddenly amount to a huge debt? The invisible unit measurements, the sizes that dominate our lives without us noticing them, are an expression to the way we grasp the complexity of reality, ways by which our minds understands, classifies and processes external phenomena that are beyond our reach.

“There are decades where nothing happens; and there are weeks where decades happen.” – Vladimir Ilyich Lenin

Because these measurement units are so basic and essential to our understanding of reality, objects and events that shatter these units invoke intense emotions. Our world suddenly seems chaotic or meaningless and existential anxiety usually accompanies the shock. Nature provides an abundance of examples for this: Ever look at the stars on a dark and clear night and wonder what all of this has to do with you? Were you ever astounded by the sheer size of a mountain or any other massive natural phenomenon or formation? Maybe you’ve tried at some point to consider the mind-boggling paradox of the atom, an extremely small unit of a “thing” that constructs all things in the universe, without us even being able to touch it? These are inhuman scales. They shatter human perception as they break into our measurement limits, breaking the limits of our perception, at the frontiers of our imagination. We do not have the ability to picture global warming, the history of mountains or the number of stars in the sky. We also have no choice but to come into contact with them: the stars are there, the mountains are there, global warming is happening as we speak, and evidently and quite weirdly, we are evidently even contributing to it. 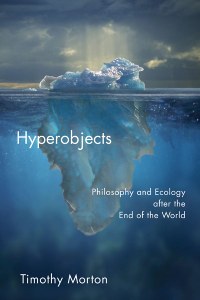 Hyperobjects, Philosophy and Ecology after the End of the World, 2013, Author: Timothy Morton

In contemporary philosophy these “things”, objects or occurrences that break away from human perception while at the same time come into contact with it, are commonly referred to as “Hyperobjects”. Utopia contributor Gili Ron is elaborating on this in her deep dive article, The Unknown, the Inconceivable and the Superhuman, Hyperobjects in Architecture, in this issue. However, we all understand what it means on the emotional level, in our guts, where we squirm in light of these scales. If not, if you think you’ve never encountered a “hyperobject”, warm and sincere congratulations! You just met CoVid-19. Viruses in general, and this virus in particular, do not play according to human rules, and so, they also do not comply with our scales. SARS-CoV-2 (the virus that causes “Corona”, or more precisely, the disease called CcVid-19) is an excellent example:  an unusual virulent behavior in human bodies provides the virus with exponential growth.  How many things that we encounter in our everyday lives follow exponential growth rates? Most of the things that we know, encounter and thus feel comfortable with, move in a linear pace: they grow slowly and expectedly. This is not the case with this virus, which doubles itself every few days and challenges the “natural growth” that we are used to in handling crises.

A fortnight is a unit rarely used. Now CoVid-19 made “two weeks” a matter of life and death, sickness and health, having a “mild” coronavirus case or a deadly one. Since when is our day not divided into staying in and leaving the house, whether for errands, social hangout, or work? China is now “close” to Italy. Going abroad is a danger and a challenge. The street is a remote, foreign, strange and dangerous place.

Our scales, the visible and invisible ones, the noticeable and the inconspicuous, are social-psychological constructs. As such, they are obviously flexible and adjustable. Different cultures for instance, grasp time in a different manner: while the “West” tends to prefer a linear model, other cultures have adopted different ways to grasp time, as a continuing present or an eternal future. What seems to us small and obvious (e.g., a skyscraper), may seem enormous and incredible to another. Our scales are flexible, and CoVid-19 completely changed the way we see the world. Time twirls, becomes hazardous; space is no longer divided into buildings, blocks or neighborhoods, but to 100 meters, 500 meters, two meters (or six feet). These scales are inhuman, foreign, unnatural to us.

But the truth is that these  inhuman scales were with us well before the virus struck, as was the discordance between the structures we wish to impose upon the world and the systems that operate within it.  The very existence of the virus is both emblematic and an actual result of this discordance.

Humanity perceives the entire world and nature itself as objects to conquer, change, process, industrialize, with zero repercussions. Moreover, while this notion may have been strongly affirmed in the past three centuries, it’s been a part of human culture for millennia, “Be fruitful and increase in number; fill the earth and subdue it. Rule over the fish in the sea and the birds in the sky and over every living creature that moves on the ground” (Genesis, A:28). The last three decades have seen some change, a diminishing of this idea, coupled with the greater understanding of climate change in the scientific community, in the political sphere, and with its communication and penetration into the idea sphere of the general public. We begin to realize that there are repercussions, consequences for our way of living on this planet, and that nature is not submissive to our human considerations. But, do we really understand the impact of our scales on the “Earth System”, as it is termed in the front-line of climate research? Probably not. SARS-Cov-2 and the other viruses of the last few decades in their rapid ongoing growing pace, are being created in the space of these (human-inhuman) scales.

In terms of our scales, the wilds of nature exist way outside of the city, beyond the suburbs, the exurbs and even further out then the farmlands and rural area of civilization: it is “out there”, not part of our lives. However, for the animals that carry these viruses (which are all zoonotic, i.e., started in one animal species, then “jumped” to people), and for the viruses themselves, the distance and distinctions are meaningless. In their inhuman proportions, the world is not divided into urban and rural, close and far, as we grasp these concepts. Furthermore, we think about these animals as game units, as a resource we can handle and manipulate as we choose, e.g., store in high density, with rapid changing populations, under unhygienic conditions. We do not even think about the consequences or aware of them. On our scale, our meat comes from nowhere, animals come from nowhere, and diseases – you guessed it – also from nowhere. They all come from an obscure, undefined “outside”, the epiphany of hyperobjects, nature in its entirety. The truth, that strikes us through this virus, is that our actions affect and change this object, and consequently, they affect change in us as well. This hyperobject that seems so remote and obscure, is at the same time extremely close, present and has great influence on our lives. Just like the virus. 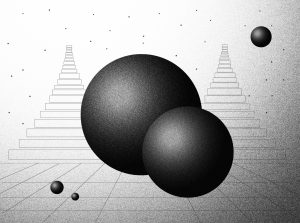 What does all this have to do with Science Fiction? 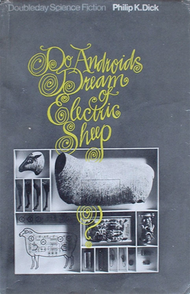 Do Androids Dream of Electric Sheep by Philip K. Dick, 1968

You may have already noticed that many of the examples given through this piece befit the science fiction genre. This is not by accident, beyond the obvious of the nature o this magazine, sci-fi has been dealing with “hyperobjects”, those concepts and ideas in object form that confound human perception, for decades. Indeed, what constructs our reality is usually described by more realistic genres, but one of the functions of sci-fi (as much as an artistic storytelling genre has any) is to describe, think, and try to feel and understand the indescribable, the thing that is both close and far at the same time: the weird, the bizarre, the superman, the inhuman, the alien. Science fiction already explored the emotions that arise in us when we are made to contend with outer space, the most imperceptible of inhuman infinities; it has dealt with the critical consequences of viruses not “only” on our health, but on our societies; and delved into the deep trenches of fear of (climate) change, the incomprehensible, unintelligible, the other, the complete and utter alien. The novel Blindsight by Canadian author Peter Watts (Guest speaker at Utopia 2018) described the encounter with the shattering and shocking impossible, not only with an alien species, but with space itself and the loneliness it holds. Phillip K. Dick’s famous novel Do Androids Dream of Electric Sheep? (loosely adapted to the film Blade Runner) describes, for example, the elusive authenticity of animals and their importance for human psychology. The films Interstellar, Ad Astra, Arrival or Aniara confront us with the void, in a manner only movies can, emphasizing the inhospitable cold and vast and empty distances, the inhuman scales, that are the inescapable truths of the universe we reside in. 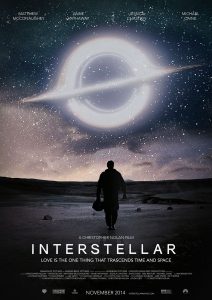 In all the aforementioned novels and films, and generally in science fiction, the story is told from the human point of view. Narrative works, in human language, do not have a real ability to break the human limitations or scales. Our blind-spots as people, our limitations, are all included within the science fiction narrative and generate its own limitations. Therefore, any attempt to try and forecast the future with science fiction is a bad idea. What science fiction does though, is explore the painful areas where we encounter our perceptual limitations. Sci-fi can sketch our scales and their boundaries and try and illustrate, with a respectful amount of conjecture and plenty of hesitation, what lies beyond those boundaries, beyond those final frontiers. Science fiction will not provide us with solutions, but it may help us cope with what we are experiencing, and with our own impairments. It may help us comprehend what CoVid-19 makes us feel, the way it breaks our human scales, faces us with the inhuman and its own scales, which are completely alien to us. Sci-fi can break the limits around our limitations, the loud silence that accompanies one of the most important facts regarding this plague: the silence around the failure of our human scales.

In this first issue we attempt to give a number of examples for the way science fiction, in various creative outlets, can help us do this, and will search for different and varied ways to explore our inhuman scales, which we encounter every day, and how they affect us. Our purpose is not to forecast or explain, calm or distress. We only intend to observe, through science fiction, what happens to human perception when it encounters something that is beyond its reach.

Designer & art director, a graduate of the Bezalel Academy of Arts and Design, loves working with print & printed formats, in addition to working with mixed media & web.